The first thing you need to know in order to organize your home is the Mount Vernon Method.

One of the Cleanies I talked to some years ago in my desperate search for help, told me that she was so impressed with the maintenance of Mount Vernon that she made it a point to talk to the woman in charge of housekeeping. She asked the housekeeper about the method they used. The housekeeper responded that she directed her cleaners to start at the front door and work around the inside periphery to the next piece to be attended, doing everything that needs to be done in each room so that the rooms are  left clean and organized. They dust from the time they come to work early in the day until it is time for the public to arrive. A few minutes before opening time the workers collect their boxes of cleaning  supplies and leave. The next day they begin where they left off and keep going from room to room until it is time to leave again.

But it is easy to clean Mount Vernon, George is not there is to mess it up.

We are not going to use this method for dusting and polishing. Basically, it is a method for organizing - not cleaning - though you may want to clean some as you organize. However, we will use the basic idea to clear clutter and organize each room of our home.

Let’s begin at the front door. Have three boxes in front of you. Label them "throw away", "give away", and "store elsewhere". You start with the first piece of furniture you come to which has a nook cranny, drawer, etc. This is where you begin. Then you will go around the inside periphery of the house, dealing with the items in these kinds of places.

You begin by throwing away all the true junk you have accumulated in the drawer. Put it in the throw away box and be serious about it. Don’t keep the pen that only works half the time and the year-old calendar even if it does have nice pictures on it. Your freedom from clutter is more important that they are.

Be willing to take a risk that you may later want what you discarded. Also realize that it may cause temporary pain to throw something out. However, it also causes a more permanent, definite pain to keep it. Throwing it out is mild pain, compared with the pain which comes from having to live helplessly with all the clutter which finds its way into the house. There is an exhilarating feeling of freedom which comes once the decision to take control of the house has been made and you actually do it by beginning to throw out.

Put items that you want to keep back in the drawer or in one of the boxes. You do not worry about cleaning walls, drapes, upholstery, etc. as you go. Keep your focus on clearing the clutter as you keep moving forward. Basically you organize each spot around the inside periphery of the house room by room.

When you have done enough for one day (about an hour), STOP. Put the boxes away and wait until tomorrow. Don’t overdo. This is a marathon, not a sprint. Don’t wear yourself out. Pace yourself. Take a day off each week so you will look forward to a break. Reward yourself when you get over a big hurdle. While you do the Mt. Vernon method,  make a list of several daily items you plan to do each day. For example, empty the dishwasher, keep the sink clear of dishes, put in a load of laundry (meaning - wash, dry, fold and put away). There will be  from three to seven on your list probably. Each day do these before you begin the Mt. Vernon method. You’ll find real control developing before  you know it. Boy! What a relief!

Do Your Closet Right

More on How to Begin

How To Begin, First Steps For Messies

The 4 Legs of the Organizing
Table on which much organizing success rests!
Concentrate on these as you launch out into your new way of life.

"Mt. Rushmore Method" found in
5 Days to a Clutter-Free House 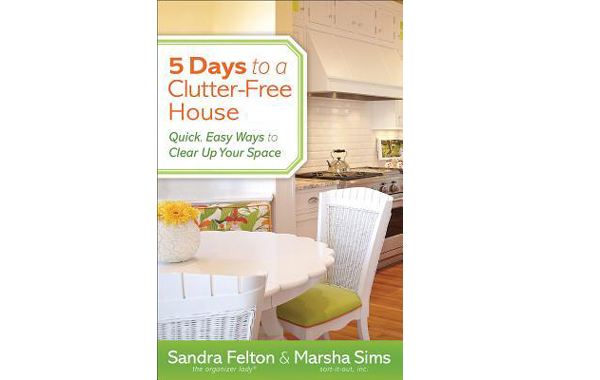